No less than 61–count ’em–61 authors and illustrators took part in the children’s book festival in beautiful Warwick, New York on Saturday, October 7th, including yours truly.  After spending the night at the idyllic Warwick Village Bed & Breakfast (which reminded me a little of the Dragon Fly Inn from Gilmore Girls),

I met up with my fellow authors at the Railroad Green in the center of town where we were greeted with swag bags, balloons, live music, snacks galore (apple cider doughnuts!) and a huge crowd of enthusiastic readers. 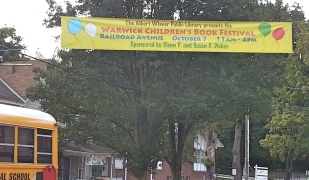 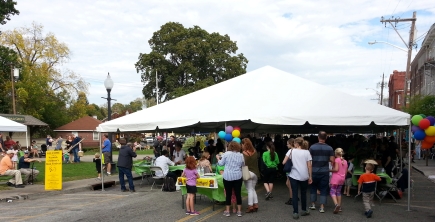 Such much going on! A finger-puppet making station? Even doggy volunteers eager to be read aloud to by reluctant readers.

And what a delight meeting renowned children’s book author Jane Yolen (who penned nearly 300 books–yikes!) and her author-daughter Heidi Stemple. Great writing genes in that family! We actually met during breakfast at the B&B and within seconds we were all three laughing our heads off. My kind of peeps.

Here we are at the festival looking appropriately amiable and authorly…

I’m summoning a volunteer with a  flyswatter to come help. (Many thanks to the many volunteers in the green T-shirts, by the way, who were super helpful–even going so far as to recharge my cell phone.)

Couldn’t leave town without a visit to Ye Olde Warwick Book Shoppe, which is just as charming as it sounds. I love things that start with “Ye Olde”…except maybe Ye Olde Sushi Shoppe. 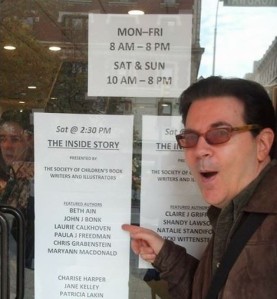 The middle initial “J” is VERY popular amongst writers. 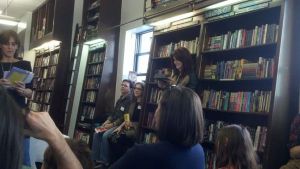 Here I am “waiting in the wings” next to Paula J. Freedman, author of My Basmati Bat Mitzvah (note her middle initial). She’s a fun lady who used to work with my friend Linda at Scholastic, who was in the audience beaming and snapping these pix with her phone. The lovely redheaded woman (Mackenzie) was timing our presentations on her tablet. It was kinda like the Quick-Fire Challenge on “Top Chef”–only with words instead of prawns. 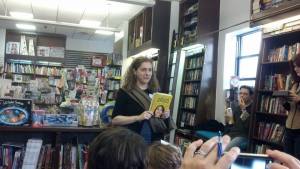 Now Paula is doing her thing while I munch away on popcorn. Not really. I was sucking on a Ricola cough drop. Just getting over a cold. (sniff-sniff) Hey, how’d I end up going last anyway?

My turn! (My backup dancers didn’t show.) I blabbed on and on about how it was a mystery that I wound up writing a mystery. (I still think it’s weird to be able to see faces in the audience. When I used to perform in musicals, the audience was always just a giant dark blob.) Suddenly I realized I was finished because I heard cheers and WILD applause. Well–polite clapping. Hands up, utensils down!

One of my official photographs taken by the ever-patient Primwatee Groover. We had the hardest time getting a squintless shot. Every time I smiled, my eyeballs disappeared! She’d say, “Okay, I think we finally got a good one this time…eh, nope.” I couldn’t help laughing my shiny round head off.

Then there was mingling, and book signing, and chocolate chip cookie eating, and since it’s nearly impossible to walk out of a bookstore empty-handed, I wound up buying a copy of Maryann MacDonald’s Odette’s Secrets (we share the same agent!) and Chris Grabenstein’s Escape from Mr. Lemoncello’s Library. (He’s a hoot and a really nice guy.) So, THANKS AGAIN, Bank Street Bookstore and SCBWI! Until next time…

In anticipation of the May 2012 release of my middle-grade novel, MADHATTAN MYSTERY, I’m taking you all on a virtual tour of the many spectacular Big Apple sites that pop up in the book. So, grab your camera and a light snack, hop on the tour bus and LET’S GO!

HAPPY SPRING! Blossoms are popping up everywhere you turn in New York City and tourists are arriving in droves once again. One of the major New York portals that’s always buzzing with excitement is the famous Grand Central Station on 42nd Street and Park Avenue in Midtown Manhattan. Actually, its proper name is Grand Central Terminal since it’s a final destination as opposed to just a stop along the way, but most folks call it Grand Central Station regardless. Not simply a transit hub, this 48-acre site is reportedly the world’s sixth most visited tourist attraction boasting approximately 21,600,000 visitors annually. There’s just so much to take in! First off, there’s the jaw-dropping ceiling of twinkling stars and zodiac symbols. In 1998, after a 12-year restoration of the train terminal, it was returned to its original glory. At Christmastime, just look up and you might catch a laser light show dancing across the ceiling timed to your favorite holiday music.

But don’t stop there. Venture on through and you’ll find a variety of shops, bookstores, banks, special exhibits, the Grand Central Market, the New York Transit Museum, and an entire dining concourse ready to please any hankering you’ve got.

Dare to venture even further and you may discover secret places—like the unmarked “Whispering Gallery” just outside the Oyster Bar & Restaurant. Because of a series of arches in the hallway, the acoustics are great, and a gentle whisper in one corner can be heard in the opposite corner as clear as a bell. That’s what sets the heroine of my novel, Lexi McGill, off on the craziest adventure of her life. It all starts with a whisper she was never supposed to hear.

Here’s an excerpt from Chapter 1 of MADHATTAN MYSTERY.

Lexi swept her sweaty curls up the back of her neck and leaned into her corner to give the Whispering Gallery a try. “Hellooo,” she sang like a bashful ghost. “How are yooou?”

Kevin squealed. “I heard that!” he cried out over his shoulder, then turned back to the wall. “Testing, testing. Do you read me?”

“Totally!” She heard him as clearly as if he were standing right in front of her. “How amazing is this?”

“Okay, listen,” Kevin said, dropping his voice an octave, “I have top-secret information for agent Alexandra McGill. But first you must prove that you’re really you—her. Over.”

“Huh? Oh. I am prrrepared to answer any and all qvestions,” Lexi replied in her best Russian accent, holding in her laugh. “please to prrroceed.”

“Only the real Alexandra McGill would know her home address. Over.”

“Roger that. Only the real Alexandra McGill would know—her favorite color. Over.”

“Just get on with it already, bonehead!”

“I’m thinking.” Kevin cleared his throat. “Your mission, Miss McGill, should-a you choose-a to accept,” he said in an even goofier accent than Lexi’s, “is to carry out the original plan—you know, as planned, but—oh, never mind, there’s Aunt Roz! Abort. Abort.”

For more info on Grand Central go to www.grandcentralterminal.com. And be sure to come back to check out Mad About Madhattan Tour Stop #3: The Central Park Carousel.

The “MAD about MADhattan” tour kicks off at Radio City!

In anticipation of the May 2012 release of my middle-grade novel, MADHATTAN MYSTERY, I’m taking you all on a virtual tour of the many spectacular Big Apple sites that pop up in the book. So, grab your camera and a light snack, hop on the tour bus and LET’S GO!

HAPPY HOLIDAYS! It’s that “most wonderful time of the year”, so what better place to begin our tour of Manhattan than Radio City Music Hall? Located a block from the gigantic Rockefeller Center Christmas tree, their trademark “Christmas Spectacular” features the high-kicking Rockettes and it’s a show—no, not just a show—an other-worldly experience unlike any other! Plenty of dazzling dance numbers, singing, costumes, and sets—plus, an onstage ice-skating rink, ballet dancing teddy bears, and a living nativity scene with live camels, donkeys, and sheep. And as if that weren’t enough, now they’re incorporating 3D effects, too. Yep, there’s actually a pair of 3D glasses attached to the programs. See? 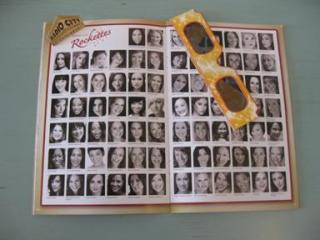 You certainly can’t fault them for not keeping up with the times. Did you know that there are even small rechargeable microphones attached to the bottom of each of the Rockettes’ tap shoes?! SO COOL! (As a former tap dancer myself, I find this really fascinating.) I saw the show for about the fourth time last year with some friends visiting from Chicago and it knocked my socks off. (No wonder my ankles were freezing when we took that horse and buggy ride through Central Park.)

Here are some more pix…

And here’s a snippet from Chapter 20 of MADHATTAN MYSTERY featuring Radio City.

Entering the lobby was like stepping into a giant Donald Trump living room, provided Donald Trump liked lots of plush red and gold—and crowds. And the jaw-dropping grandiosity continued inside the theater itself. Lexi had never seen so many seats. They extended clear into the heavens, tier after tier, like a humongous wedding cake.

“Can you believe they were actually going to tear this down?” Aunt Roz said as the usher led them toward the stage, which was a glowing orange sunburst that was practically as big as the sun. “I haven’t been inside since the renovation. Melrose, have you ever been?”

“I saw the Christmas Spectacular once, back when I was, like, a fetus. Alls I remember is one of the camels in the livin’ nativity scene takin’ a dump onstage.”

That angel-of-silence thing was happening again—the fifth time that night, if you were counting, and Lexi was. Something was definitely strange with Melrose—well, stranger than usual. She had started off the evening glowing and now she was glowering, and Lexi couldn’t figure out why.

Check out Radio City’s website for more info on this beautiful and historic theatre. http://www.radiocity.com And be sure to stop back here for Tour Stop #2: Grand Central Terminal!