A short story I published in Highlights magazine way back in 2004 has suddenly resurfaced as an Audible Audiobook! Hwah?! It’s always exciting to see my previously published poems and short stories show up in classroom workbooks, student testing–and now audiobooks (even though the statute of limitations has long run out for any sort of residual payments, dang it.) Still, it’s a joy to see these things take on a new life. 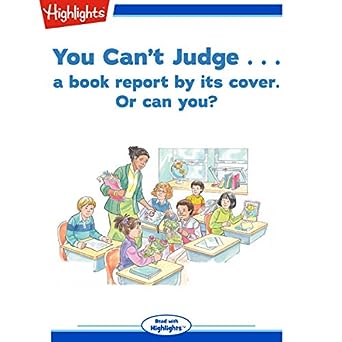 Inspired by my own book-report writing experience in which I ALWAYS over-decorated the covers, eliciting criticism from my classmates–things like “Oooh, that is SO not fair; he only got an A ’cause of his fancy-schmancy cover” (yes, we said things like “fancy-schmancy” back then)–You Can’t Judge garnered me a Highlights Author of the Month Award. I remember how surprised I was when the engraved pewter plaque was delivered to my door! Wait, let’s see if I can find it…

Here it is. A little scratched and dented but–aren’t we all? Can’t wait to see what pops up next. Maybe that Christmas poem I wrote in second grade will reemerge as a made-for-TV movie on the Hallmark Channel! Love you, Highlights! xo

You Can’t Judge a Book Report by its Cover

No less than 61–count ’em–61 authors and illustrators took part in the children’s book festival in beautiful Warwick, New York on Saturday, October 7th, including yours truly.  After spending the night at the idyllic Warwick Village Bed & Breakfast (which reminded me a little of the Dragon Fly Inn from Gilmore Girls),

I met up with my fellow authors at the Railroad Green in the center of town where we were greeted with swag bags, balloons, live music, snacks galore (apple cider doughnuts!) and a huge crowd of enthusiastic readers.

Such much going on! A finger-puppet making station? Even doggy volunteers eager to be read aloud to by reluctant readers.

And what a delight meeting renowned children’s book author Jane Yolen (who penned nearly 300 books–yikes!) and her author-daughter Heidi Stemple. Great writing genes in that family! We actually met during breakfast at the B&B and within seconds we were all three laughing our heads off. My kind of peeps.

Here we are at the festival looking appropriately amiable and authorly…

I’m summoning a volunteer with a  flyswatter to come help. (Many thanks to the many volunteers in the green T-shirts, by the way, who were super helpful–even going so far as to recharge my cell phone.)

Couldn’t leave town without a visit to Ye Olde Warwick Book Shoppe, which is just as charming as it sounds. I love things that start with “Ye Olde”…except maybe Ye Olde Sushi Shoppe.

It’s hotter than a witch’s bunyons here in NYC–and it’s supposed to get worse.  So, in honor of this relentless heatwave, I’ve decided to post a ranty little nonsense poem I wrote over a decade ago expressing my sweaty summer frustration.  (It’s healthy to get it all out, right?) Feel free to pour yourself a frosty tall glass of iced-tea, crank up the A.C. and have at it.

It’s one of those sweltering, hot summer days.
Not a hint of a breeze and the sun is ablaze.

The sidewalk is smoking, the air is too thick,
I need gallons of water and ice cubes to lick.

The people out walking look sleepy and damp,
And the letter I’m mailing won’t stick to the stamp.

My sneakers are melting and stuck to my toes,
And my glasses are foggy and slide down my nose.

My clothes are all wrinkled and wet—nothing fits.
And Olympic-size sweat pools encircle my pits.

With no trace of spit, I can’t swallow or speak,
And I’d run for that bus, but I can’t—I’m too weak.

It’s too hard a choice to go left or go right,
My whole body’s expanding, my hair is too tight.

That pen in my pocket’s too heavy a load,
And I think I just saw a small pigeon explode.

Those men wearing suit jackets aggravate me,
’Cause they won’t take them off—IT’S ONE-HUNDRED-AND-THREE!

It’s only July, lots of summer to go.
I can’t wait to complain about blizzards and snow.

I saw Neil Simon’s Brighton Beach Memoirs on Broadway last night, and couldn’t help but marvel once again at the playwright’s brilliance. How he seamlessly blends funny with drama and always keeps it real. It’s what I strive for in practically all of my writing – but it sure isn’t easy. Funny comes pretty naturally for me, I’m happy to say (It’s a gift – I don’t own it); and high drama actually comes – well, easier than I thought it would for someone who’s always doing funny voices and cracking corny jokes. The way I see it, funny = entertainment; drama = story and heart. IMHO (in my humble opinion) the perfect story has plenty of both elements. Personally, I can’t sit through a heavy drama if it doesn’t have at least a splash of humor here and there. It’s like swallowing dry toast points without a refreshing beverage to wash them down. The trick is making humor and drama work effectively together in the same piece. It’s a delicate balance.

My favorite Simon play is his Pulitzer Prize winning Lost in Yonkers. Well, I actually never saw it onstage, but I saw the movie many times. One of my favorite tricks Simon employs is establishing something hysterically funny early on (like Aunt Gert’s speech impediment); then reintroducing it later in the play in the midst of a highly dramatic scene where you’d least expect it.

JAY: I don’t know. She can’t… She can’t talk right. She says the first half of a sentence breathing out and the second half sucking in. You’ve seen it.

ARTY: Only about Aunt Bella. Come on. Show me how Aunt Gert sucks in her sentences.

JAY: (glances upstairs first, then to Arty, imitating Aunt Gert’s voice) “Oh, hello, Jay. How are you? How’s your father? And how’s – (sucks breath in) – your little brother, Arty?”

ARTY: (gets hysterical) I love it. I love it when you do that.

JAY: I once saw her try to blow out a candle and halfway there, she sucked it back on.

Well, later on in the play, when Aunt Bella calls a family meeting to announce her engagement to her mentally-challenged boyfriend, the stuff really hits the fan. As an audience member, you’re on pins and needles, weeping, empathizing with poor Aunt Bella. Then suddenly Aunt Gert says a line, sucking half her words back in with a raspy gasp – and now you’re in hysterics, too.

Eliciting laughter is no easy task. Eliciting tears, not so easy either. But doing BOTH at the same time? Genius! Bravo, Neil Simon. I kiss the nethermost hem of your garment!